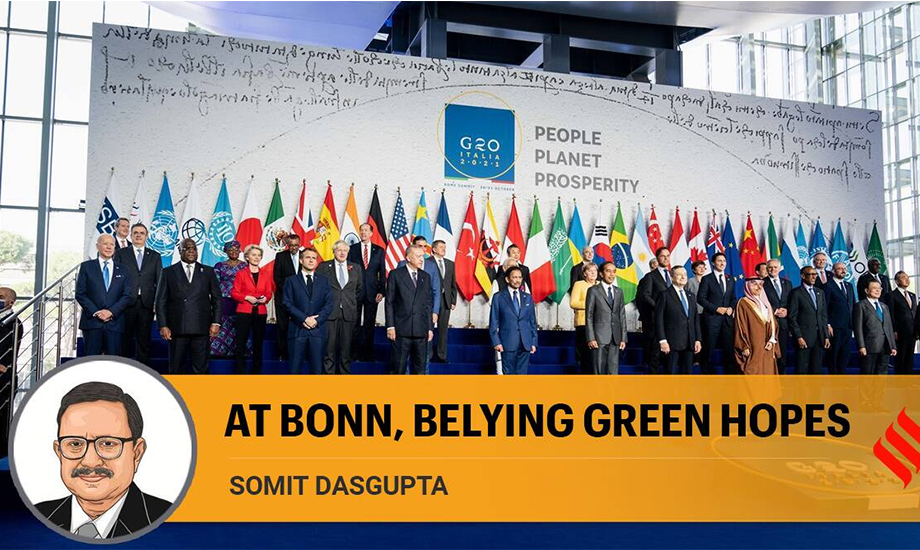 From June 6-16, representatives from more than 100 countries descended on Bonn to hold preliminary discussions on what could be the final communiqué at the conclusion of COP27, to be held at Sharm-el-Sheikh later this year. Discussions were centred around climate finance and it was evident, not surprisingly though, that there was hardly any convergence of issues. The developed and developing countries or for that matter, big polluters and small polluters, were speaking from the ends of the spectrum with no meeting ground. The focus on climate issues, in any case, has been relegated to the background somewhat because of the Ukraine crisis, leading to a fuel and food shortage. The deliberations at Bonn were also disrupted when delegates walked out after a Russian official used the platform to criticise Ukraine. It would be useful to have an overview of some of the major issues that were discussed to gauge what lies ahead at COP27.

Much of the discussion was around “loss and damage”, which was being experienced by many of the smaller countries, especially with big coastlines, due to rising river levels, loss of agricultural productivity, loss of livelihoods, etc. It was argued that one needs to look into this issue right now and provide financial assistance to cope with it. Countries that are adversely affected can’t wait till 2030 or 2050 since, by that time, they would be in absolute peril. This brings into focus the debate between adaptation and mitigation.

While mitigation would mean, for example, setting up solar generation units to avoid carbon footprints, possible examples of adaptation include rolling out new varieties of drought-resistant crops. It is generally felt that whatever funding has come for climate change issues has mostly been directed towards mitigation. This is primarily because mitigation projects have a cost-benefit analysis and, therefore, it is easy to lend money because you can get it back through interest payments. The same is difficult for adaptation projects, which would be in the form of grants. The idea to provide assistance for “loss and damage” was opposed by the US and the EU. Unfortunately, discussions on the subject were more in terms of workshops rather than a dialogue, which is considered more formal and likely to result in tangible gains. The Green Climate Fund is considered too cumbersome and the process too lengthy. Hence, the need for an alternate funding route was imperative.

During the Bonn conference, the Alliance of Small Island States (AOSIS) expressed the view that to be more meaningful, the aim should be to reduce emissions by 20 per cent by 2025 itself. The logic is that the next round of NDCs is due only in 2025 and by that time, it would be too late to formulate a plan that is achievable by 2030. There has been a call from some quarters that countries should revisit their NDCs by the end of 2022, to strengthen them. The only two countries to respond to this are Egypt and Australia, where the latter has enhanced its emissions reduction target to 43 per cent by 2030 compared to the 2005 level.

The use of the remaining carbon space available to limit temperature rise to 1.5 degrees centigrade, a highly contentious issue, was also discussed in Bonn. The US resisted being labelled as a “big emitter” and was not willing to take responsibility for its historical emissions. What the US wanted instead is that other big emitters like China and India take on greater responsibilities for cutting down emissions. However, the like-minded group of developing countries (LMDCs) — which included China, India, Saudi Arabia and the Arab countries — were opposed to this. There is no single estimate of how much carbon space is really available as on date, but broad indications are that at the given emissions rate, it would be roughly 10 years.The raging debate is how to distribute this available space equitably amongst countries, which would mean that someone has to take the burden of stiffer targets

If there was any hope that discussions at Bonn would provide an acceptable draft, which could be taken forward during COP27, it was misplaced. The demand of the developing countries for a provision of climate finance at a scale much higher than $100 billion a year fell on deaf ears. Incidentally, the figure of $100 billion was arrived at arbitrarily and that too way back in 2009. Developing countries are of the view that the actual funding requirement for climate change issues runs into trillions of dollars and not the billions being spoken of — and not being disbursed. It can be safely concluded that the Egyptian presidency will have its hands full when they sit down for negotiations during COP27. One will have to invoke the blessings of the pharaohs to work out a miracle.