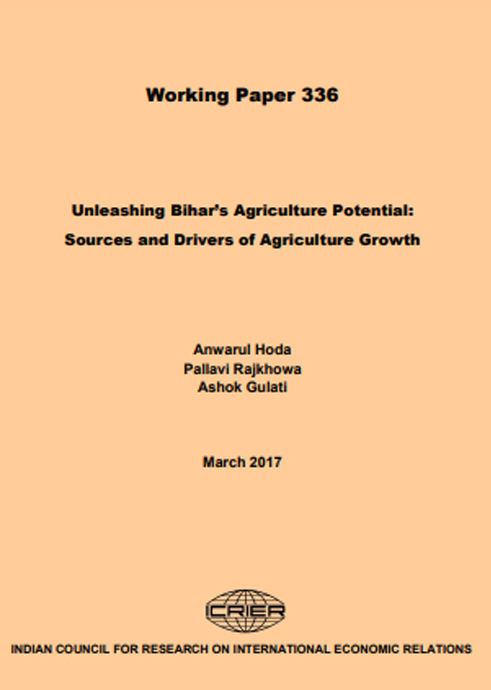 This paper forms a part of the study on Agricultural growth and its linkages to poverty alleviation in six selected states of India, namely Bihar, Uttar Pradesh (UP), Odisha, Punjab, Gujarat and Madhya Pradesh (MP). Bihar, UP and Odisha have experienced low to moderate growth in agriculture over the period 2000-01 to 2014-15. Punjab has been the seat of green revolution and was a front-runner in agriculture during late 1960s, but slipped to low levels of
agri-growth in recent period. Gujarat and Madhya Pradesh have shown some extra-ordinary growth in their agriculture sectors (almost three times the all India agriculture growth) in the last decade or so. The key idea of this study was to look for policy lessons from each other within Indian context, and see how to propel growth in agriculture for faster alleviation of poverty. We gratefully acknowledge the financial support provided by Bill and Melinda Gates Foundation (BMGF) for this important project. In particular, we would like to thank Mr. Hari Menon, Mr. Brantley Browning and Dr. Purvi Mehta from BMGF for their very productive and constructive interaction from the very conception of the project, and their suggestions as the project evolved. We would also like to thank Mr. Shishir Sinha, Development Commissioner, Mr. Vijoy Prakash, former Agriculture Production Commissioner and Mr Pratyaya Amrit, Secretary, Department of Energy, Government of Bihar for useful interactions on various issues.