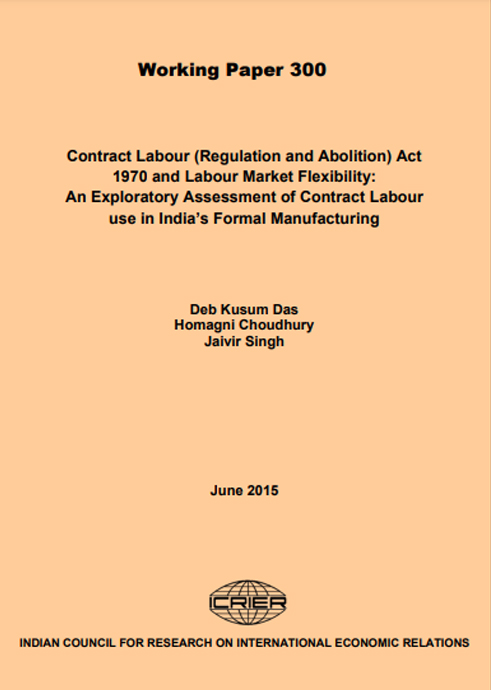 One particularly significant piece of labour legislation in India is the Contract Labour (Regulation and Abolition) Act, 1970 (CLA,1970), which regulates labour hired by firms through the offices of a labour contractor – such labour being referred to as ‘contract’ labour in India. This paper seeks to examine this Act and its implication for manufacturing
employment in India. While empirical evidence seems to indicate the presence of large number of ‘contract’ workers in the Indian manufacturing sector across a spectrum of industries, this increasing contractualisation of the workforce has not been typically discussed as a pointed labour regulation issue. It has been widely argued that Indian labour law imposes institutional rigidities inhibiting employment expansion; but note needs to be taken of a
ruling by the Supreme Court in 2001 which interpreted the CLA, 1970 in the case of Steel Authority of India v. National Union Water-Front Workers. This judicial interpretation has led to increased flexibility in the Indian labour market enabling firms to employ ‘contract’ workers widely, often employing them in jobs where they work alongside permanent workers. Against this backdrop, we undertake a preliminary empirical exercise in an attempt to document the increase in engagement of ‘contract’ workers and to dissect the data to see patterns in the use of ‘contract’ workers in formal manufacturing. These empirical patterns help us generate hypotheses for further work on the normative consequences of large scale use of ‘contract’ labour – the use of ‘contract’ workers no doubt brings in flexibility in labour usage and can be judged as a beneficial development for employers, however issues of
investment in skills remains a hindrance in enhancing labour as well as overall welfare.