Domestic Value addition and Foreign Content: An Analysis of India’s Exports from 1995 to 2011

Domestic Value addition and Foreign Content: An Analysis of India’s Exports from 1995 to 2011 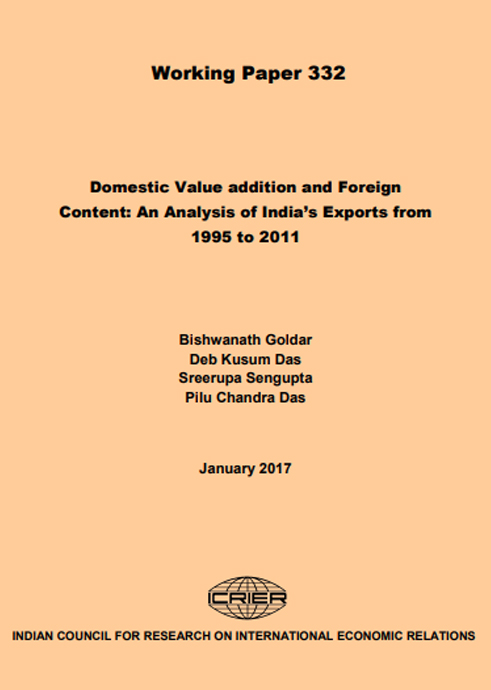 India’s merchandise trade has been growing in importance in recent years with increases in share in world exports and imports (Economic Survey, 2013-14). However with fragmentation of production process across countries, higher exports can no longer be linked to higher production as imports of intermediate products which are used in exports also increase. Against this background, it is very important to understand the contribution made to a product within the confines of the geographic boundaries of that economy. The present study estimates and analyzes the import content in Indian exports at a disaggregated industry level using the Hummel et al. (2001) approach used in this strand of empirical literature, as for instance applied by Koopmans, Wang and Wei (2008). The analysis highlights several interesting patterns. First, for India’s exports, the import content in exports increased steadily from about 11 percent to about 22 percent in the time period 1995 to 2011. The rise in import
content was relatively greater for merchandize exports from about 11 percent in 1995 to about 26 percent in 2011. In services exports, by contrast, the foreign value added content is relatively low and the increase has been rather modest. Second, at an individual commodity level (based on Input-output table classification), the decline in domestic value added content was associated with a simultaneous increase in foreign value added share for a majority of the commodities, indicating the pervasiveness of international fragmentation. Finally, a comparison of foreign value added share in aggregate exports with other emerging economies shows that in terms of degree of integration in global value chains, India lags behind most important emerging economies – Taiwan, Korea, Philippines ,Vietnam, Malaysia, Thailand and China.