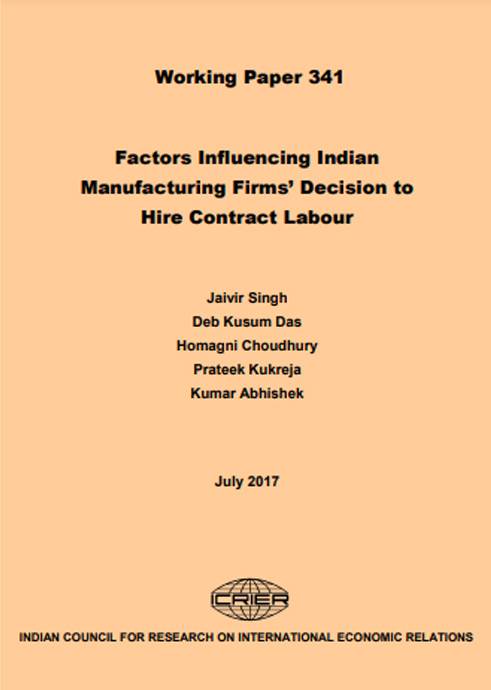 The present study attempts to investigate the factors affecting a firm’s decision to hire contract workers. We use information from a specially commissioned survey of manufacturing firms undertaken in 2014 by ICRIER, as part of a World Bank funded project ‘Jobs and Development: Creating Multi-Disciplinary Solutions’. The survey covered 500 firms in five states, namely Haryana, Maharashtra, Tamil Nadu, Karnataka and Gujarat and spread across five major industries; viz. Auto Components, Electronics and Electrical Equipment, Leather Products, Textile and Garments and Food Processing. The estimation is carried out using a logit model, where the firm’s decision, whether or not to hire a contract worker is assumed to be a binary dependent variable. Our findings suggest that the firms producing for the export market are more likely to engage contract workers than the ones producing for domestic market. Secondly, presence of trade union activity considerably increases the likelihood for a firm to hire-in contract worker. Further, we find that there seems to be a higher probability for enterprises belonging to a capital-intensive industry to hire in contract workers than the ones belonging to a labour-intensive industry. Next, our findings also suggest that the firms located in states having a ‘protective’ labour legislation are more likely to hire contract workers than the ones located in states with rather flexible labour regulations. The most interesting finding, however, pertains to the ‘skills’ variable. We find that firms with a higher employment of unskilled workers are more likely to hire contract workers than the firms employing a lesser number of unskilled workers.