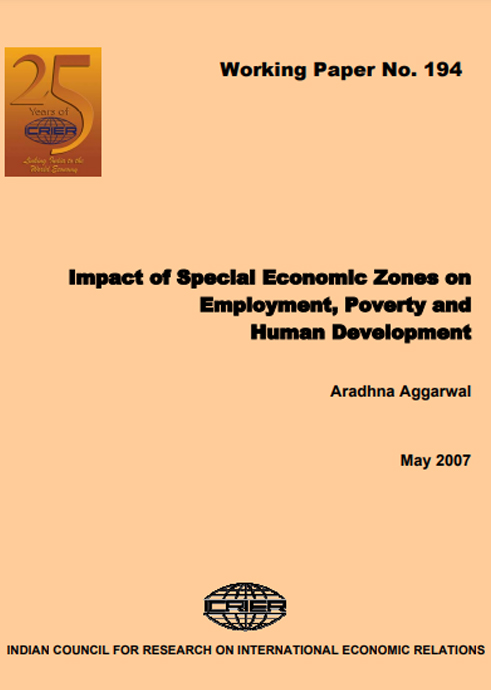 This study aims at examining the impact of Special Economic Zones (SEZs) on human development and poverty reduction in India. It identifies three channels through which SEZs address these issues: employment generation, skill formation (human capital development), and technology and knowledge upgradation. It examines how the impact of SEZs is passed through each of these channels. The study finds that the modality differs significantly according to the characteristics of the SEZs, in particular, the level of their development as reflected in the composition of economic activities. Within this framework, the study examines the sectoral and economic composition of SEZ activities in India. It finds that labour intensive, skill intensive and technology intensive firms co exist in India’s zones and, therefore argues that all the three effects described above are likely to be important in the
Indian context. Empirical findings reported in the study are based on the data collected from both secondary sources and primary surveys. The primary survey based data was generated through extensive interviews of entrepreneurs and workers across the three largest SEZs (in terms of their contribution to exports and employment) : SEEPZ, Madras and Noida. The analysis reveals that ‘employment generation’ has been the most important channel through which SEZs lend themselves to human development concerns, in India. Employment generated by zones is
remunerative. Wage rates are not lower than those prevailing outside the zones. Besides, working conditions, non monetary benefits (such as transport, health and food facilities), incentive packages and social security systems are better than those prevailing outside the zones, in particular, in the small/informal sector. The role of SEZs in human capital formation and technology upgradation is found to be rather limited. The study argues that the zones’ potential could not be exploited fully in India. This could primarily be attributed to the limited success of SEZs in attracting investment and promoting exports. The new SEZ policy gives a major thrust to SEZs. However the creation of SEZs alone does not ensure the realization of their potential. The government will need to play a more proactive role for effective realization of the full range of benefits from SEZs.