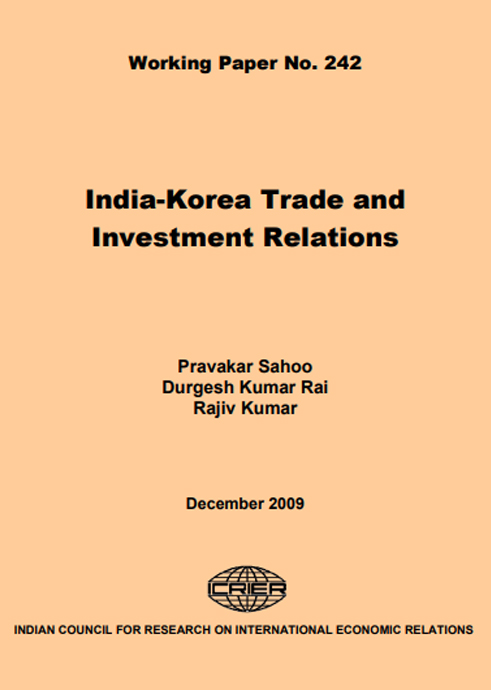 Though economic relations between India and Korea have been strengthening, the current size of trade and investment between the two countries is relatively low compared to the size and structural complementarities of the two economies. In this context, the present paper analyses trade and investment relations and explores future areas of potential co-operation between India and Korea. We find that the increase in merchandise trade between the two
countries has been mainly because of the changing demand structure and comparative advantages of both the economies in complementary sectors in recent years. The Revealed Comparative Advantage (RCA) analysis, at both the aggregated and disaggregated levels, shows that while Korea has been specialising in a few, high value-added manufacturing products, India’s exports have been more diversified. The analysis also indicates that both
the countries have comparative advantages in different products in the same industry, revealing the opportunity for intra-industry trade (IIT). Moreover, the increasing trade complementarity index (TCI) shows that Indian and Korean trade gradually has become more compatible over time, indicating that any agreement between the two countries is likely to enhance trade flows. The trade intensities between the two countries reveal that Korea is doing much better and there is scope for India to improve its export intensity with Korea. The study also suggests the areas where there is huge scope for increased investment and technological collaboration between the two countries. Further, there is huge potential for trade in services in areas such as information technology, science and technology,
pharmaceutical industry, broadcasting, tourism, healthcare and human resource development. Removal of tariff and non-tariff barriers, especially sector specific barriers, will give a major boost to bilateral trade and investment relations.