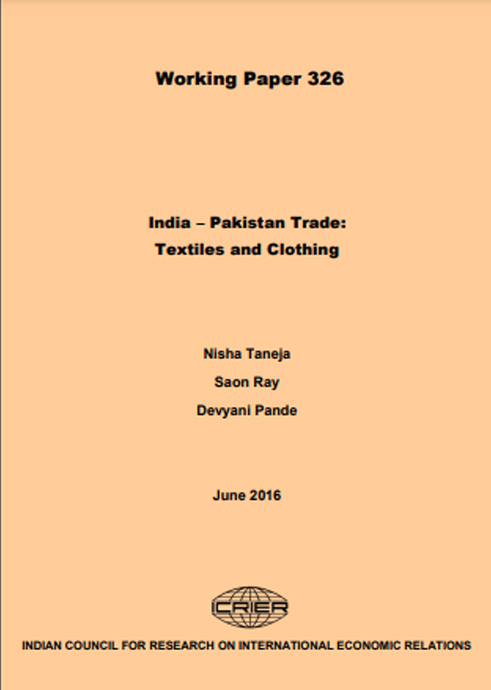 India and Pakistan are the leading textile trading nations in the world. Among the major sectors, the textile and clothing sector accounts for the largest share in trade between India and Pakistan chiefly because of the similarities in culture and the importance of the sector in their economies. However, the level of bilateral trade in textile and clothing at USD 722 million (2013) is dismal as compared to the trade potential of USD 2.10 billion. To make a case for increasing trade in this sector, this study analyses the reasons for low levels of trade, the nature of trade in this sector and the intra-industry trade between the countries. The textile and clothing items account for 5.7 percent of the items in Pakistan’s negative list and 25 percent in the sensitive lists of both countries. Moreover, the figures for value of imports subject to higher tariffs by way of being in India’s sensitive list are much higher than that for Pakistan. Bilateral trade is more pronounced in textiles rather than clothing, and cotton yarn is the most traded textile item. Despite that, there is a high level of intra-industry trade in clothing and apparels. This reflects complementarities in trade in textiles and clothing between the two
countries. An insight into the type of intra-industry trade points that trade is mostly concentrated in items that need processing and differ in quality. Indian exports are most likely to be high-quality processed exports. A survey among stakeholders validated the findings that India produces better quality fabric and is more competitive in the manmade fibres segment. On the other hand, Pakistan has a competitive edge in the production of cotton.