Law, Skills and the Creation of Jobs as ‘Contract’ Work in India: Exploring Survey Data to make Inferences for Labour Law Reform

Law, Skills and the Creation of Jobs as ‘Contract’ Work in India: Exploring Survey Data to make Inferences for Labour Law Reform 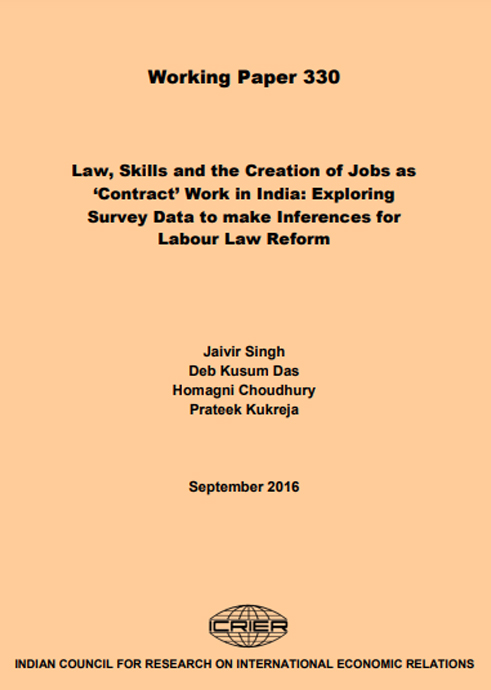 The paper begins with a discussion of Indian labour law and the increasing use of ‘contract labour’ in Indian formal manufacturing. We question the widespread perception that employment of contract labour provides flexibility to employers in terms of adjustment in response to demand and technology shocks, by bringing in the concept of ‘incomplete contracts’. Apart from the ASI data, we use the responses from a specially commissioned survey in Haryana: a state having a well-established industrial base with a large pool of skilled labour force, in order to gain empirical insights on the links between law, skills and the extensive use of ‘contract’ labour. The paper then goes on to discuss some theoretical literature emphasising the importance of relationship specific investments for skills and proceeds to emphasize the role of the labour law in this context. It is strongly hoped that these findings will be used to comment on the costs and benefits of the ‘contract’ labour system and its variants
across South Asia, particularly in view of moves to reform labour law in South Asia.