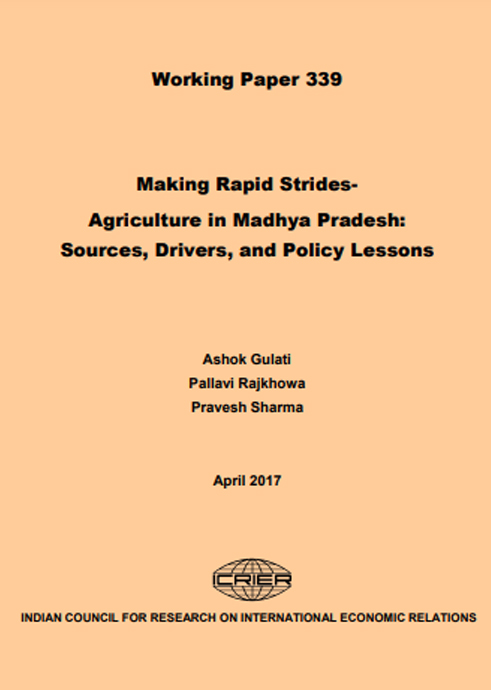 This paper forms a part of the study on agricultural growth and its linkages to poverty alleviation in six selected states of India, namely Bihar, Uttar Pradesh (UP), Odisha, Punjab, Gujarat and Madhya Pradesh (MP). Bihar, UP and Odisha have experienced low to moderate growth in agriculture over the period 2000-01 to 2014-15. Punjab has been the seat of the green revolution and was a front-runner in agriculture during the late 1960s, but slipped to
low levels of agricultural growth in recent period. Gujarat and Madhya Pradesh have shown some extraordinary growth in the agriculture sectors (almost three times the all-India agricultural growth) in the last decade or so. The key idea of this study was to look for policy lessons from each of these states, and see how to increase the agricultural growth rate for faster alleviation of poverty. We gratefully acknowledge the financial support provided by Bill and Melinda Gates Foundation for this important project. In particular, we would like to thank Mr Hari Menon, Mr Brantley Browning and Dr Purvi Mehta from the BMGF for their very productive and constructive interaction from the very conception of the project, and their suggestions as the project evolved.
We would also like to express our gratitude to Mr R. Parasuram, former Chief Secretary, Government of Madhya Pradesh and Mr. Siraj Hussain, former Secretary of Agriculture and Farmers’ Welfare for their invaluable comments and suggestions. We would also like to thank Mr. Rajesh Rajaura (Principal Secretary, Department of Farmer Welfare and Agricultural Development), for useful interactions on various issues and Mr. Pankaj Agarwal (Principal
Secretary, Water Resource Department), for connecting us to relevant persons in WRD. We would like to express our appreciation to Mr. Shirish Mishra (Chief Engineer, WRD) for validating data on irrigation. We are also thankful to the participants of the “Workshop on Studying Drivers of Agricultural Growth in selected Indian State with focus on Role of Agricultural Extension Systems”, held in Delhi on June 17, 2016. Finally, our special thanks to Smriti Verma who gave a careful reading to do a consistency check and light editing of the final version. Needless to say, if there are still any errors, it is the authors who are fully responsible for that.