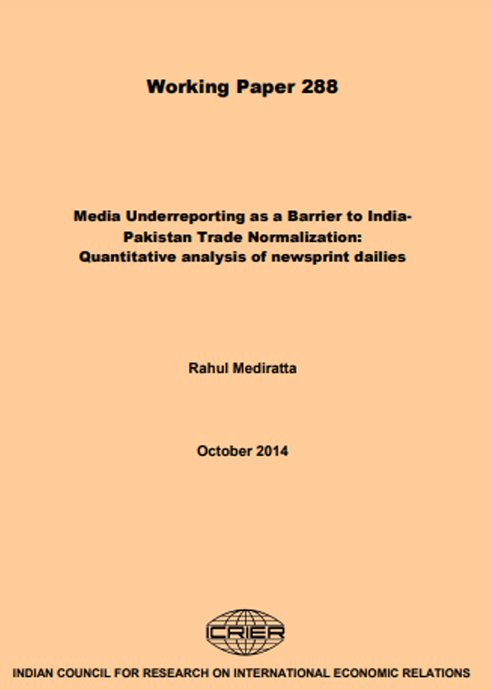 Over the past two decades, India and Pakistan have been involved in several activities regarding bilateral trade normalization. These developments have been concentrated around three periods: the late-1990s, mid-2000s, and early-2010s. Are these waves of trade-related activity reflected in popular media coverage? This question connects to a longstanding and important criticism that media coverage on India-Pakistan relations is pre-occupied with
security events, to the exclusion of non-security issues such as trade. A dearth of popular awareness on trade-related activities between India and Pakistan may limit the extent to which it is politically feasible for governments to further invest in trade normalization, or perhaps the extent to which the public pressure politicians to do so.
This paper measures the quantum of nearly two decades of media coverage on India-Pakistan trade, among five newspapers: Times of India (TOI), Economic Times (ET), Business Standard (BS), New York Times (NYT) and Wall Street Journal (WSJ). Results indicate that ET, BS, and WSJ capture the dynamism of trade-related activities between India and Pakistan. TOI and NYT, by contrast, do not. The paper considers why underreporting in the
TOI and NYT is problematic, and identifies future research directions.