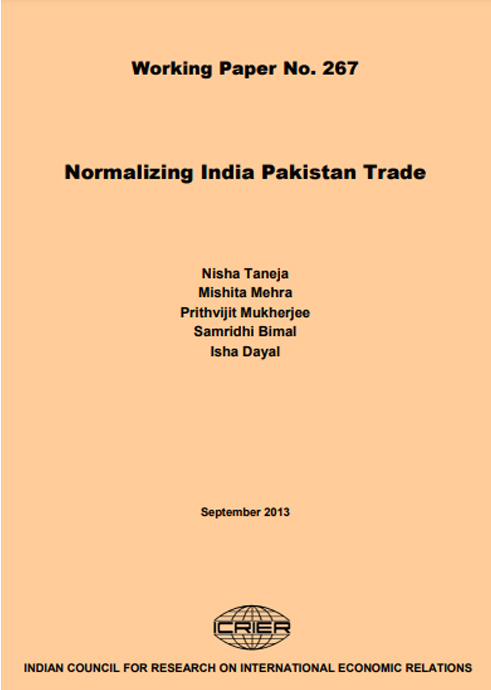 With the trade normalization process between India and Pakistan gathering momentum since November 2011, new opportunities for enhancing bilateral trade have opened between the two countries. This study estimates the trade potential between India and Pakistan, and examines how this potential can be realized. Using the Trade Possibility Approach for all items traded, followed by selecting only those items in which the countries have a Revealed Comparative Advantage (RCA) to export, the trade potential between India and Pakistan is estimated to lie between US$10.9 billion and US$19.8 billion. Of the US$10.9 billion trade potential, India’s export potential accounts for US$7.9 billion and import potential US$3 billion. With a large number of items belonging to the negative or sensitive lists, the study estimates the trade potential accounted for by these items. Sectorwise analysis depicts that bilateral trade shall receive a boost if the textile sector is liberalized in both countries, with Pakistan liberalizing its automobile sector too. In the services sector, trade possibilities have been identified in Information Technology (IT), Business Process Outsourcing (BPO), health and entertainment services.