PATENTING PUBLIC-FUNDED RESEARCH FOR TECHNOLOGY TRANSFER: A Conceptual-Empirical Synthesis of US Evidence and Lessons for India

PATENTING PUBLIC-FUNDED RESEARCH FOR TECHNOLOGY TRANSFER: A Conceptual-Empirical Synthesis of US Evidence and Lessons for India 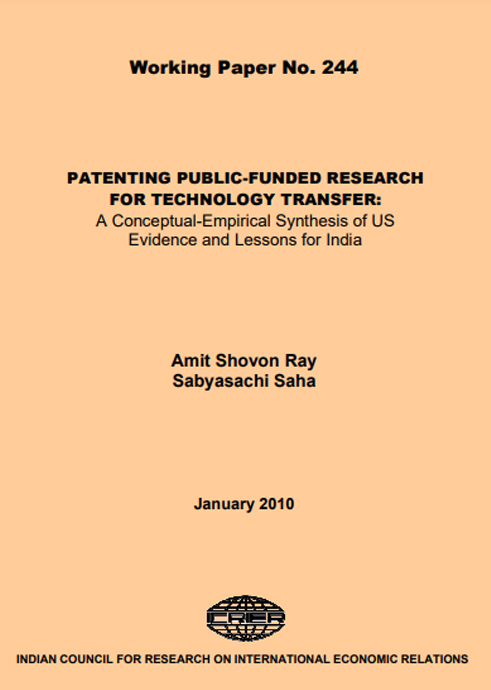 The question of protecting intellectual property rights by academic inventors was never seriously contemplated until the introduction of the Bayh-Dole Act in 1980 in the US. The Act allowed universities to retain patent rights over inventions arising out of federally-funded research and to license those patents exclusively or nonexclusively at their discretion. This particular legislation was a response to the growing concern over the fact that federally funded inventions in the US were not reaching the market place. In this paper, we present a critical review of the US
experience after the Bayh-Dole Act and argue that the evidence is far from being unambiguous. We discuss the debate surrounding the Act – the extent to which it was successful in achieving its objectives, the unintended consequences, if any, and more generally, the effectiveness of IPR as a vehicle of technology transfer from
universities. We also discuss the limited evidence on Bayh-Dole type legislations introduced in other countries. A new legislation, along the lines of the US Bayh-Dole Act – The Protection and Utilisation of Public Funded IP Bill, 2008 – is presently before the Indian parliament. The paper presents an Indian perspective against the backdrop of the US experience in an attempt to draw concrete lessons for India.