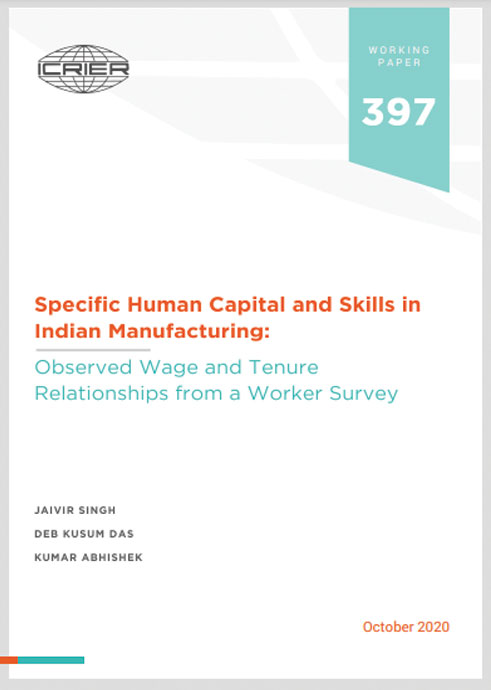 It is an overarching and persistent fact that job creation in the Indian manufacturing sector has fallen short of the growth in the workforce. The successive governments since 2009 onwards have attempted to initiate policies to enhance the growth in employment along with quality of jobs in the formal manufacturing sector. Against this background, the present study motivates us to explore issues surrounding the investment in specific capital by workers, attempting to assess empirical patterns of specific human capital investment. In particular, we hope to discern basic displays of specific human capital investment by crucially investigating whether there is a link between tenure and wages – this has come to be an important investigation all over the world, typically undertaken to signify the presence of a specific capital investment in the employment relation. Using specially commissioned survey to look at issues associated with the employment of contract workers in the Indian manufacturing sector. The worker-oriented study survey used in this paper aimed to ask questions regarding human capital accumulation from workers instead of employers, covering workers from the same set of industry groups covered in the earlier employer oriented survey. The predominant finding of our empirical investigation is that there is a reasonably strong link between wages and tenure, allowing us to infer that a value can be ascribed to the continuation of relations between employers and their workers rather than truncating the relationship. In other words, we have reasonably robust support to acknowledge the presence of relationship-specific human capital in the Indian manufacturing sector