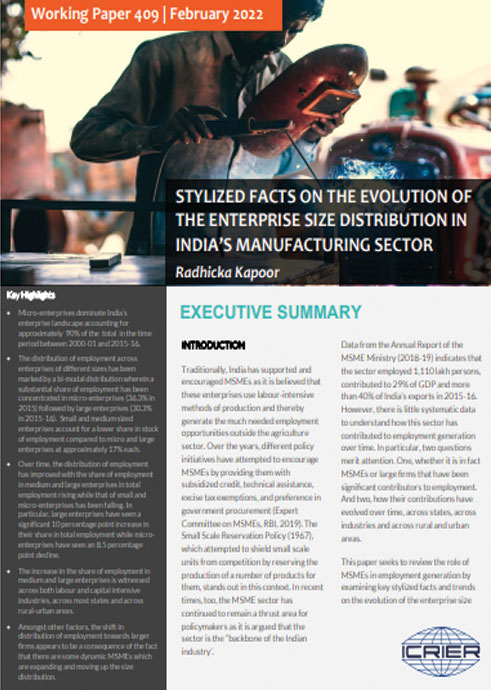 The expansion of enterprise level datasets has led to the emergence of a large body of literature on patterns of employment and job dynamics across different enterprise types. In the context of India, where MSMEs have been traditionally supported and encouraged by different policy initiatives to generate the much needed employment opportunities outside the agriculture sector, two questions merit attention. One, whether it is in fact MSMEs or large firms that have been significant contributors to employment in the manufacturing sector. And two, how their
contributions have evolved over time, across states, across industries and across rural and urban areas.
Combining establishment-level data from the registered/formal and informal/unincorporated manufacturing sector in India for the period between 2000-01 and 2015-16, we find that the enterprise landscape has been dominated by micro-enterprises which have accounted for approximately 90% of total enterprises for the entire time period under study. The distribution of employment, on the other hand, has been marked by a bi-modal distribution wherein a large share of employment has been concentrated in micro-enterprises followed by large enterprises. Over time, there has been an improvement in the employment distribution with the share of medium and large enterprises in total employment rising, while that of small and microenterprises has been falling. This phenomenon is observed across labour and capital intensive industries, across most states and across rural and urban areas.