Technological Capability as a Determinant of FDI Inflows: Evidence from Developing Asia & India

Technological Capability as a Determinant of FDI Inflows: Evidence from Developing Asia & India 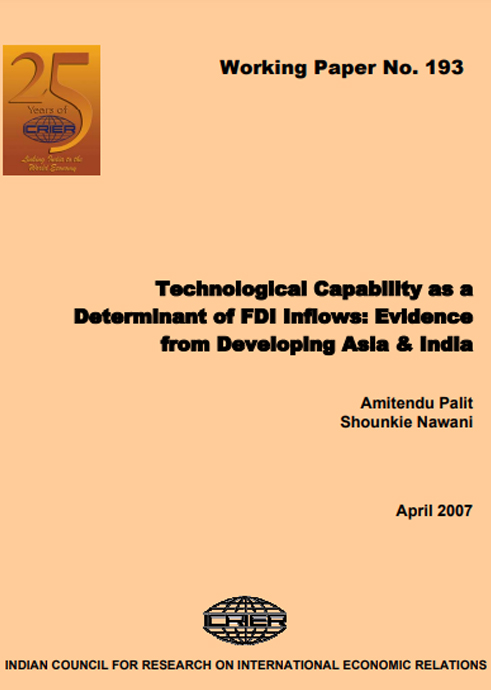 During 2006-07, FDI inflows into India were more than double than those in 2005-06. Indeed, during April-January 2006-07, inward FDI into India at US$16.4 billion, was far higher than the annual average inflow of US$2-3 billion during the late 1990s. In recent years, India has also emerged as one of the leading FDI destinations in Asia. On the whole, the pattern of FDI inflows to developing Asia itself has changed significantly over the years. Some leading Southeast Asian economies (for example, Malaysia, Indonesia, Thailand and Philippines) no longer attract as much FDI as they used to in the past. This is in sharp contrast to some East and Southeast Asian economies that continue to draw large FDI (for example, China, Hong Kong and Singapore). In the above context, this paper attempts to explain the country-wise variations in the pattern of FDI flows to developing Asian economies by empirically identifying locationspecific features influencing such flows. The paper argues that some countries in the
region, which have developed long term sources of comparative advantages in the form of superior technological capabilities and supporting infrastructure have consistently attracted greater volumes of export-oriented FDI.