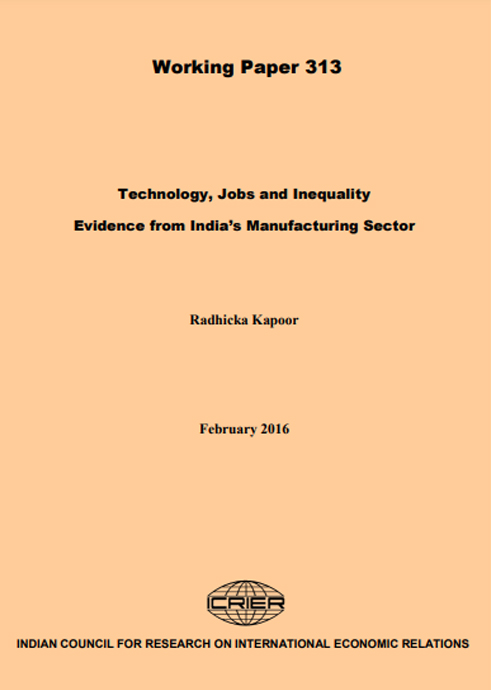 Faced with easier access to foreign technology and imported capital goods, firms in India’s organised manufacturing sector adopted advanced techniques of production leading to increasing automation and a rise in the capital intensity of production. This has raised much concern about the ability of the manufacturing sector to create jobs for India’s rapidly rising largely low-skilled and unskilled workforce. However, what has attracted less attention in the literature is the impact of capital augmenting technological progress on the distribution of income and wage inequality. This paper attempts to fill this gap using enterprise level data from the Annual Survey of Industries. We find that with growing capital intensity of production, the role of labour vis-à-vis capital has declined. The share of total emoluments paid to labour fell from 28.6% to 17.4% of gross value added (GVA) between 2000-2001 and 2011-12, while, the share of wages to workers in GVA declined from 22.2% to 14.3%. Importantly, even within the working class, inequalities have increased. The share of skilled labour (non- production workers i.e. supervisory and managerial staff) in the wage pie rose from 26.1% to 35.8%, while that of unskilled labour (production workers) fell from 57.6% to 48.8% of total wage bill. However, it is not just the growth of capital intensity but another important, though independent change in the labour market (i.e. the rising share of contract workers) that explains rising
inequality. Our results also underline the existence of capital-skill complementarity: firms with higher capital intensity employed a higher share of skilled workers and the wage differential between skilled and unskilled workers was higher in these firms.