The differential impact of Japanese and U.S. foreign direct Investments on exports of Indian manufacturing

The differential impact of Japanese and U.S. foreign direct Investments on exports of Indian manufacturing 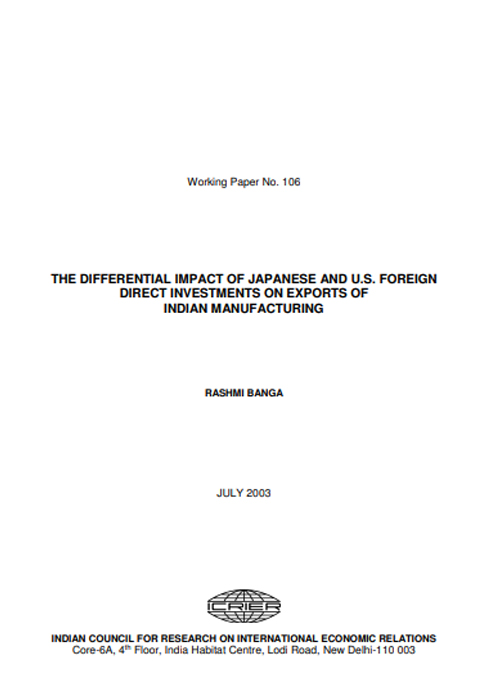 One of the debated issues in the literature of development economics is the role played by the inward foreign direct investment in export performance of developing countries. Since the beginning of the decade of 1990s, the Indian government has adopted various liberalised the policy regarding foreign direct investment (FDI) and tried to
remove various impediments. Earlier studies have found that FDI has not played any significant role in export-promotion of Indian industries. This study aims to find whether FDI has led to diversification of export in Indian manufacturing sector in the post reforms period. It also examines whether the source (nationality) of Foreign Direct Investment (FDI) matters with regard to its impact on the exports of the host country. The impact of FDI on export intensity is examined separately in the traditional export sectors and nontraditional export sectors of Indian industries. Both industry level and firm level analyses have been undertaken. The paper shows that FDI has a positive and significant impact on the export-intensity of non-traditional export sector leading to export diversification. The impact is shown to differ with respect to the source of FDI. U.S. FDI is found to have a positive and significant impact on the export-intensities of the industries in the nontraditional export sector, while the impact of Japanese FDI is not significant. The study concludes that an important impact of foreign direct investment in India is that it has led to export diversification in the post reforms period.