Trends and Economic Dynamics of Guar in India

Trends and Economic Dynamics of Guar in India 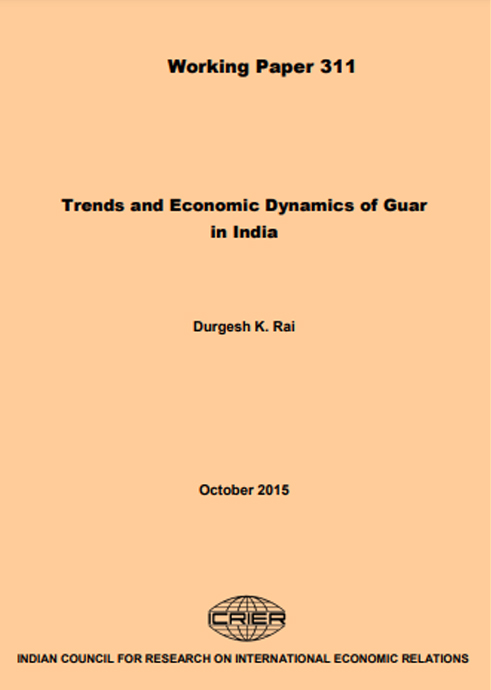 Developments in international markets in recent years have transformed guar from a low value crop grown on marginal land to one that can generate substantial income for processors, manufacturers, traders and farmers. India’s export of guar products, particularly guar gum powder, increased rapidly from a mere US$ 84.7 million in 2001-02 to US$ 3,930 million in 2012-13, becoming the largest agricultural export in the country. However, two
years later, the value of India’s exports of the product plunged to US$ 1,574, owing to a unit price decline. Fluctuations in guar prices have been a source of uncertainty and confusion among stakeholders regarding the long term outlook for the product. This study examines the major aspects of demand, supply, trends in trade, traditional and emerging end-uses, competing products, cultivation and production in order to enable the stakeholders to make an assessment of the outlook for the product and its derivatives. The outlook for guar in the long term is viewed as optimistic, based mainly on the large and sustained demand for guar gum particularly in North America created by the shale revolution. The prospects have brightened further with the emergence of China as a large export destination for Indian guar products. The country has the largest technically recoverable shale gas resources in the world and it aims to substantially increase its shale production in the coming years. The demand for the product is likely to be pushed up further across the world by the expansion of the processed food industry, which is the second largest user. However, the study strikes a note of caution on account of the volatility in petroleum prices. If the recent decline in global crude prices continues, the competitiveness of shale oil and gas production may be hit and this in turn would affect guar gum demand, at least in the short run.