Value Addition, Jobs and Skills: A Study of India’s Exports

Value Addition, Jobs and Skills: A Study of India’s Exports 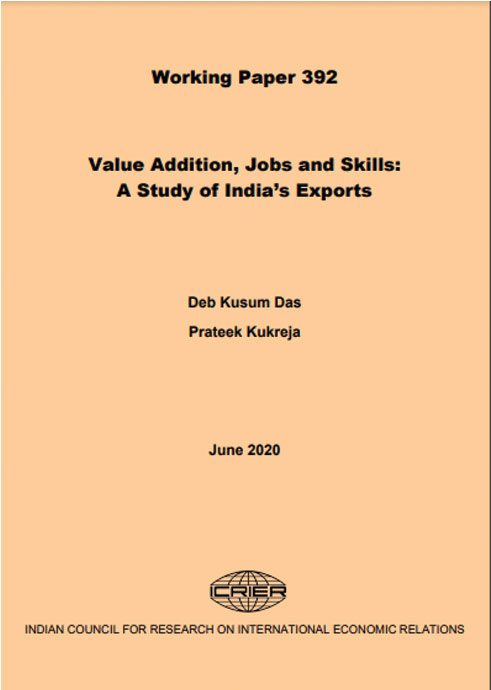 Exports serve as an engine of economic growth and can potentially help countries come out of poverty and unemployment. However, as the production process is increasingly getting fragmented globally, greater exports no longer imply higher domestic production, as imports of intermediate products used as inputs in exports also increase. Global Value Chains (GVCs) have now become a defining feature of trade in goods and services globally. Economic Survey 2019-20 also highlighted the importance of GVCs in India’s exports, by devoting an entire chapter, suggesting ways to integrate Indian firms into GVCs. With the advent of GVCs, the official trade data does not go very far in explaining the job creating aspect of exports. Further, technological changes are creating new occupations and jobs as the demand for workers with requisite skills is rising. At the same time, some existing jobs may be altered, reduced or eliminated. Therefore, besides assessing the extent of employment supported by India’s exports, it is also important to understand the skill composition of such jobs. In this regard, the present study looks at the trends in domestic and foreign value-added share, and employment and skill-composition of jobs supported by India’s exports between 2003-04 and 2013-14 using an Input-Output (I-O) table framework. The analysis highlights several interesting patterns. First, import content in exports has steadily increased from 15.9% in 2003-04 to 27.2% in 2013-14. Secondly, export related jobs grew at a much faster rate than overall employment during the period. Thirdly, a chunk of these jobs has gone to persons with below secondary education. While the rate of growth for these low skilled jobs has declined, we observe a sharp rise in the rate of growth of high skilled jobs supported by exports. Lastly, there is also a huge inter-sector disparity in the skill composition of jobs supported by exports, with agricultural exports supporting majorly unskilled and low-skilled jobs, whereas exports of services supporting mostly high skilled ones.