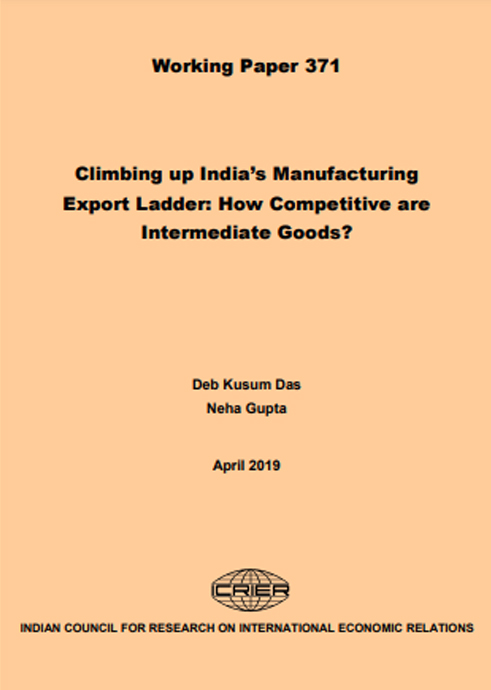 The rising trade in intermediate goods accounts for almost two-thirds of world’s trade (MGI, 2019). India’s export share for intermediate goods in its total exports has increased from 31.18% in 2011 to 32.52% in 2016. Moreover, India’s overall share in world merchandise exports has itself increased from 0.6% in 1993 to 0.8% in 2003 to 1.7% in 2016 (WTO, 2017), which endorse immense potentials for moving up manufacturing export ladder. So far, literature has widely studied the usefulness of imported inputs that feed into manufacturing exports, but focus is required for assessing the capacity as intermediate exporter. Recent ‘Make in India’ initiative boosts of making India competitive in exporting of manufactured products. But the potential cannot be fully tapped if India’s competitive
intermediate products for exports are not identified, which is the aim of this paper. The paper uses the dual methodologies of ‘Competitiveness Analysis’ and ‘Comparative-Cost Analysis’ (based on export unit values) to identify potential intermediate exports of India during the time-period 2012-14 and covering 50 export markets. This paper first identifies 74 India’s potential intermediate products which are found to be highly competitive for exports in the identified 42 markets. In addition, we find that large proportion of these intermediate
products is being exported by India at lower unit costs as compared to the competitorexporters. Based on rigorous cost analysis, this paper then identifies most-competitive and highly cost-advantageous 15 intermediate product-market combinations for Indian exports. These majorly include chemicals, iron and steel articles, glass products, plastics, and leather intermediate inputs and cotton yarn. They are identified as high priority items for increasing India’s export competitiveness. Europe is reported as the best export destination for India’s intermediates. Our study has important policy implications for helping Indian exporters while developing more proactive domestic industries for the identified intermediate inputs.