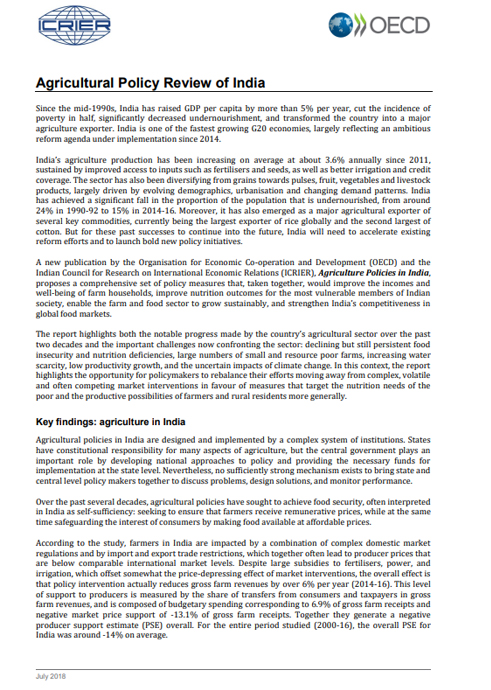 Since the mid-1990s, India has raised GDP per capita by more than 5% per year, cut the incidence of poverty in half, significantly decreased undernourishment, and transformed the country into a major agriculture exporter. India is one of the fastest growing G20 economies, largely reflecting an ambitious reform agenda under implementation since 2014. India’s agriculture production has been increasing on average at about 3.6% annually since 2011, sustained by improved access to inputs such as fertilisers and seeds, as well as better irrigation and credit coverage. The sector has also been diversifying from grains towards pulses, fruit, vegetables and livestock
products, largely driven by evolving demographics, urbanisation and changing demand patterns. India has achieved a significant fall in the proportion of the population that is undernourished, from around 24% in 1990-92 to 15% in 2014-16. Moreover, it has also emerged as a major agricultural exporter of several key commodities, currently being the largest exporter of rice globally and the second largest of cotton. But for these past successes to continue into the future, India will need to accelerate existing reform efforts and to launch bold new policy initiatives.